our mycelium is growing! 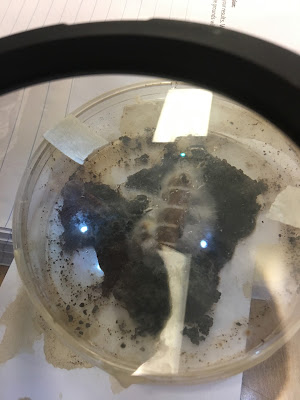 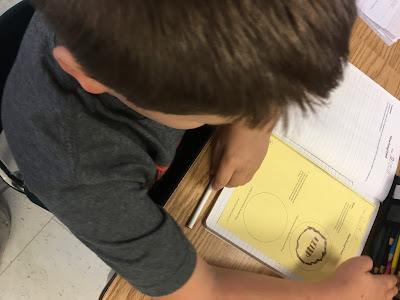 It’s totally growing.  White stringy mycelium is growing in our petri dishes.  They have also been able to compare mold (which is growing on the wooden plug without mycelium) with the mycelium covered plug and it’s impressive how much they are noticing the differences between the two.  We discussed our findings, wrote about what we observed and illustrated our petri dishes.  They had thoughtful and valuable conversations about what they noticed and I love hearing their thoughts and ideas.
Posted by EllenMc at 8:18 PM No comments:

Email ThisBlogThis!Share to TwitterShare to FacebookShare to Pinterest
partial products 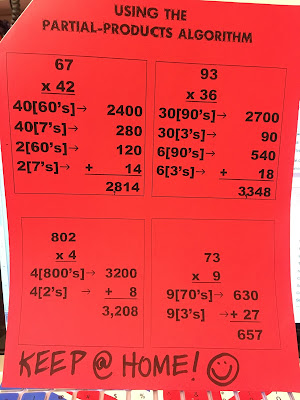 This is a fantastic strategy for solving multiplication problems.  When I first started teaching it to kids, I was hesitant.  It’s totally different from the way I learned.  As it turns out, that’s a great thing.  It breaks down the problem and shows you what you are actually doing.  I am sending home a cheat sheet in the homework packet and this should stay at home (it’s on red paper).  Try it yourselves too.  You will be surprised at how much it makes sense and helps kids understand the concept along with how to solve the problem.  Please take some time to practice this strategy at home.  It’s something they will need to master and practicing the steps can only help!  Thank you!
Posted by EllenMc at 8:15 PM No comments: 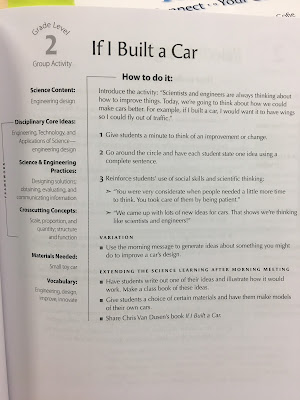 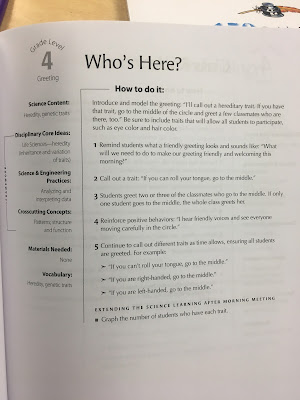 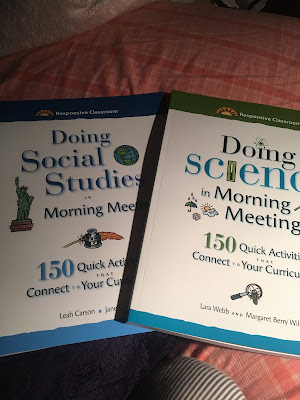 I love books.  This much we know is true.  I started using two new resources this week for our morning meetings.  They are:  Doing Science in Morning Meetings and Doing Social Studies in Morning Meeting.  These are quick morning meeting ideas that are directly connected to science and social studies.  They have been a lot of fun and the kids are enjoying them a great deal.  Our morning meetings continue to be fabulous.  I love learning new things about each of them, and it’s so fun to watch them interact with one another.

Posted by EllenMc at 8:14 PM No comments:

Email ThisBlogThis!Share to TwitterShare to FacebookShare to Pinterest
Personal Narratives 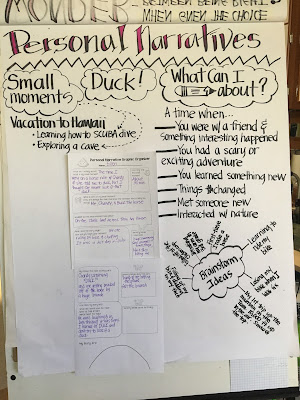 We do a lot of writing in room 306.  As I’ve said on numerous occasions, writing is difficult.  We are now working on PERSONAL NARRATIVES and kids have been using a variety of strategies to figure out what they will be writing about.  We are talking about SMALL MOMENTS – small snippets of time they should be writing about, rather than large chunks of time.  If you want to write about your vacation to Hawaii, think about something that happened on your trip, instead of the entire trip.  I shared a story from my childhood called “DUCK!”.  Ask them to tell you about it.  J  Telling a story is a strategy too.  If you are telling people about something that happened to you, you could write about it too.


We are BRAINSTORMING.  We are using GRAPHIC ORGANIZERS.  We are PRE-WRITING.  We are SHARING our thoughts.  We are WRITERS.
Posted by EllenMc at 8:13 PM No comments:

Email ThisBlogThis!Share to TwitterShare to FacebookShare to Pinterest
Seesaw assignments 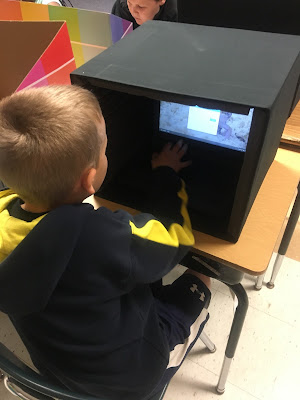 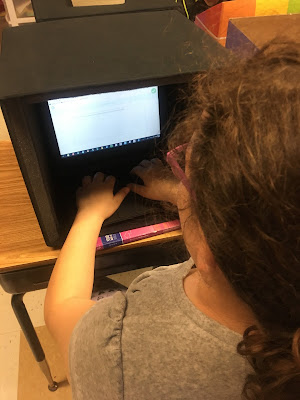 Seesaw added a cool new feature that allows me to assign something to the class and it will show up as ASSIGNED on their Seesaw app.  I gave them two assignments this week and am looking forward to creating new assignments for them to work on throughout our week.  We are still working on managing the work we are doing within the time frame we have, but I think everyone is getting better about doing their work.  I am getting better too!  It’s a fun program to figure out and I am exciting about creating new things for them to do in the coming weeks.  If you done so, please sign up for Seesaw!  It’s such a cool way for your kids to share what they are doing in our classroom.  Let me know if you need me to send you the link again!
Posted by EllenMc at 8:13 PM No comments:

Email ThisBlogThis!Share to TwitterShare to FacebookShare to Pinterest
our Auction Masterpiece 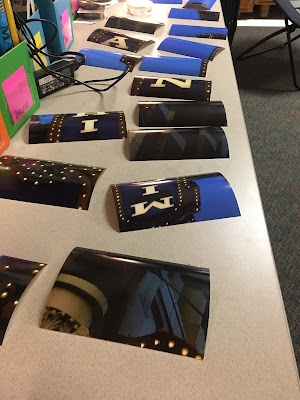 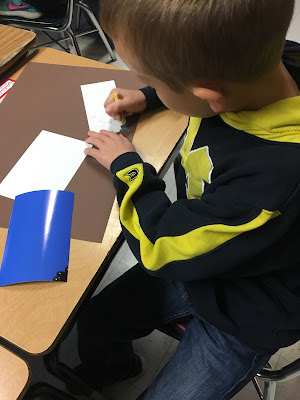 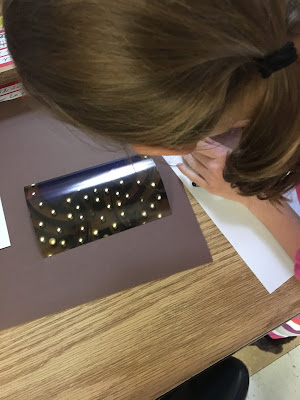 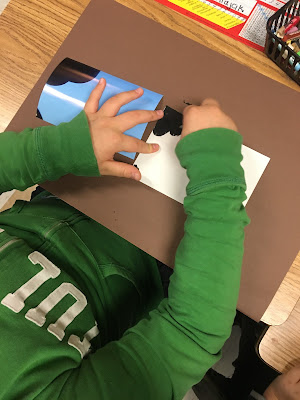 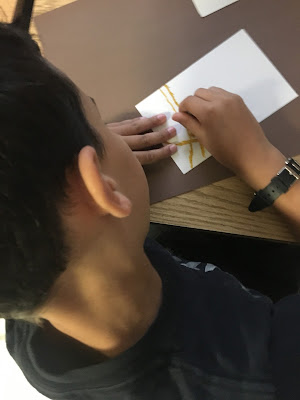 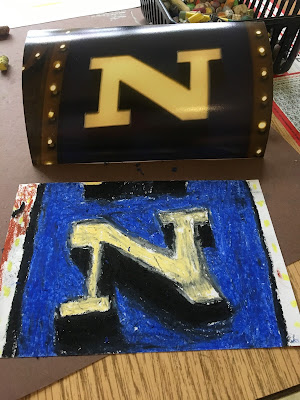 Creating a work of art for the auction is one of my favorite things to do.  I love seeing their faces when we put the puzzle pieces together, revealing the photograph.  I cut the poster (of a photograph I took) out and they aren’t aware what it is until everyone has finished their drawings.  I will let you know how the auction will work this year, as it has changed somewhat.  As soon as I know more info, I will pass it along to you!
Posted by EllenMc at 8:11 PM No comments: 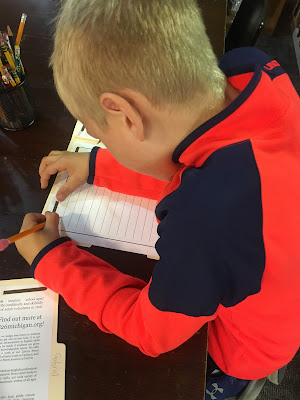 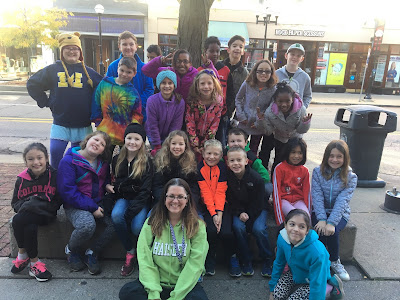 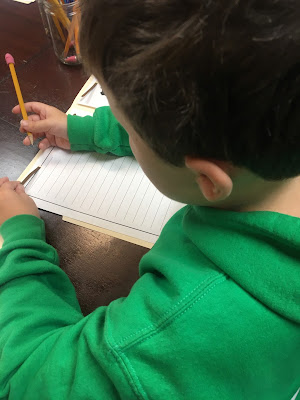 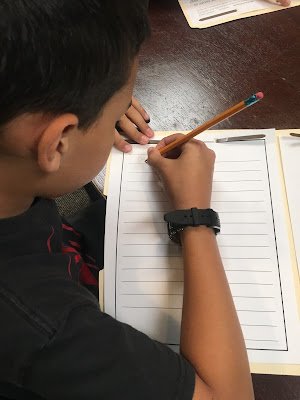 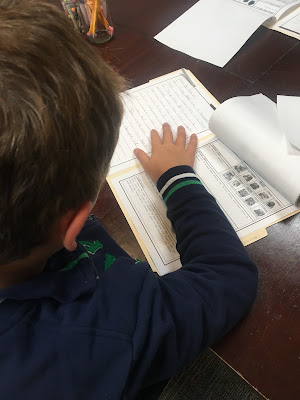 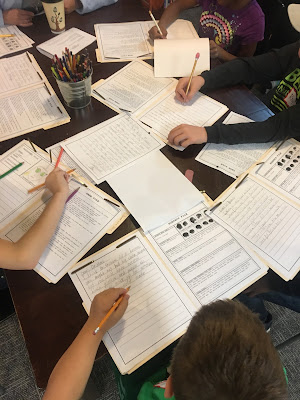 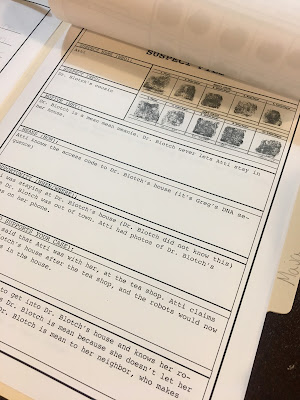 After riding the AATA bus, we land at Blake Transit Center and make our way to Liberty Street, where we enter the Robot Repair Shop (always fun to pass through this fun shop!) and head back to the lab.  Kids gathered on the floor to meet Cat and find out what they will be working on in our two-hour time slot.  They were asked to write a story and began to talk about plot, characters, problems within the story, etc..   Suddenly, they are interrupted by the evil Dr. Blotch.  She is communicating via speakers from the Moon (she’s visiting her vacation home).  She immediately starts yelling at Cat and she complains that her glasses have been stolen.  After a lot of haggling (she hates kids, so Cat does her best to convince her the room is full of adults, she agrees to let Cat and the adult detectives in the room solve the mystery of the missing pair of glasses.  Three suspects are paraded through and kids get a chance to interview and question each suspect.  While they are interviewing, there is an 826 staff member taking notes on the computer and what she is typing, it is being projected behind Cat where kids can read what she has written.  Cat has prepared them to interview the suspects and discussed key words (alibi, suspect, evidence, motive, scene of the crime, etc.) and guides them while they ask questions, learning about each suspect and why they might be the guilty one.  They were AMAZING.  They asked thoughtful and relevant questions, noting how each suspect evaded questions and how their body language made them think they were lying.  After interviewing the three suspects, they were sent to write a letter to Dr. Blotch telling her who they think took her glasses and WHY.  They needed to give EVIDENCE as to why they chose this suspect, trying to convince her of their guilt.  They were also given a chance to create an ID badge and personnel file.  Brilliant work was being done at every table, from every pencil.  Every single kid was on task for the entire 2 hours.  Two hours.  To wrap up our day, we had to share our letters with Dr. Blotch so she was able to determine who she thought stole her diary.  Was it: Edna Speilberg?  Her fancy and rich next-door neighbor?  Atti, her mooching cousin?  Or was it a former employee, Jane?  They guessed and several kids thought it was all THREE suspects.  As it turns out, it WAS ALL THREE!  J 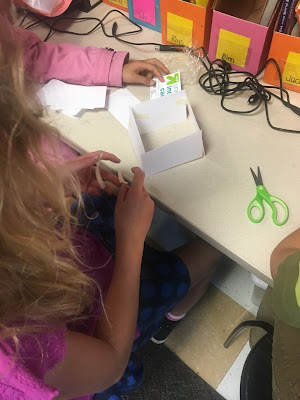 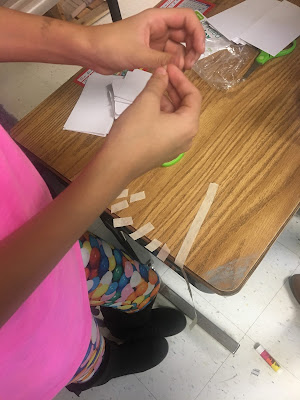 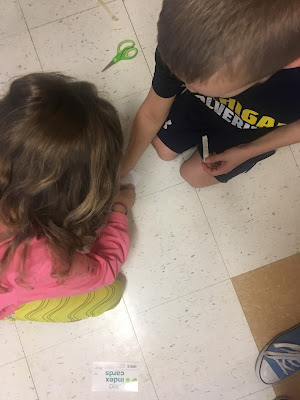 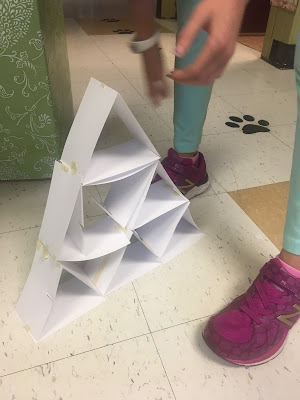 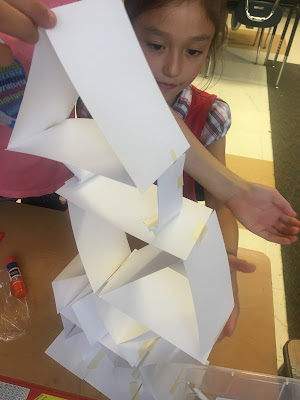 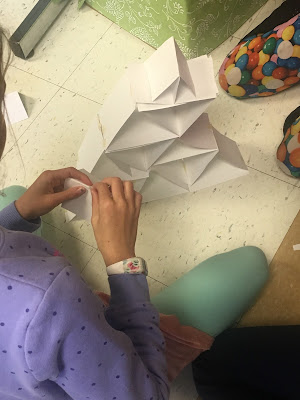 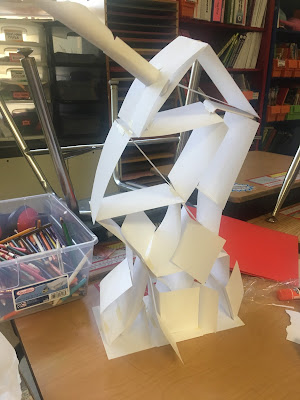 STEM activities are one of the most requested activities in my classroom.  They don’t take a huge amount of time (40 minutes or so), and you don’t need a ton of materials.  Today they used up to 100 index cards and a yard of masking tape.  They could cut their index cards and they could put them together in any way they think will benefit their tower.  The goal:  build the tallest index card tower possible in the time given.
Here are some things I heard as I walked around the room:
“I need to get more support beams on this side.”
“Triangles are strong.”
“Secure it!  Secure it!”
“Make our tape last!”
“Structure.  That’s key.”
“Check out our base!”
“We need to angle it, for strength.”
Brilliant.  Your kids are amazing.


These activites aren’t easy.  They are asking them to do something in a fairly short amount of time, and work with one another.  It’s hard!  I love how they talk with one another and am always curious to see who comes up with clever ideas and how they all respond if their structure fails.
Posted by EllenMc at 8:17 PM No comments: